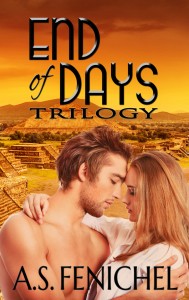 Good question. Here’s the thing, I love mythology. I love the Greek and Roman myths about gods and mortals. I love the way many of those myths have given us words and phrases we still use today:  Achilles heel, Adonis, Caught between a rock and a hard place, The Midas touch.

Back to the Mayan calendar and the end of days. I had a dream about a man, in my dream he looked at bit like a court jester. He was stealing from an abandoned house, again in the dream it was more of a castle. A woman appeared in a bolt of lightning. At first she looked like she was kissing a dark haired man, but then my hero realizes the man is sucking the life from her. The hero reaches into the lightning bolt and grabs the woman, pulling her into his world. And I woke up.

Now what? Somehow, with the help of a publisher’s call for submissions, that brief dream metamorphosed into three books about love surviving the end of the world as we know it. I studied all I could about the Mayan, Aztec and Olmec mythologies and allowed the stories to intermingle with the ancient legends.

I’m pleased to bring you Mayan Afterglow, Mayan Craving and Mayan Inferno in one volume at the fabulous price of $2.99 at Amazon.  Also available at Amazon Unlimited.

End of Days Trilogy can be purchased in eBook format for/from:

Here’s a bit more about End of Days Trilogy:

Three stories of good vs. evil, proof that love can survive anything—even Hell.

Mayan Afterglow– They called it The End of Days after humanity met with near annihilation. Ten months later, the real end is coming. Ian only cares about survival until he rescues Aileen. It will take a savior falling in love with a thief to save the world.

Mayan Craving– Surviving the End of Days was only the beginning. While danger and passion pull them together, doubt may rip them apart. Asher and Nancy will need more than a carnal connection if they hope to survive.

Mayan Inferno– Revenge is the name of the game for Robin but Breadan has responsibilities—people to keep safe. Neither can avoid their attraction, but losing focus means disaster for everyone. The fate of the world rests on their shoulders, and love could be the deadliest distraction of all. 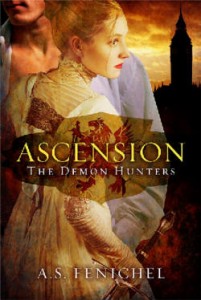 For a limited time, Ascension, The Demon Hunters book 1 for just .99₵

Pick up your copy at this wonderful price wherever you buy digital books. Ascension can be purchased in eBook format for/from: