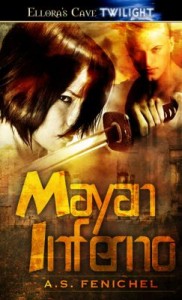 In celebration of the print release of Mayan Inferno, I thought we’d talk about the End of Days, apocalypse, the rapture, Armageddon, the final battle, holocaust, showdown between good and evil. Call it whatever you like, every race and religion has some version of the end of the world as we know it. I went with End of Days because when I wrote these books December 21, 2012 was fast approaching and Mesoamerican mythology is so wonderfully rich.

Of course the books are fiction, but there is nothing like researching a culture, their religion and turning it into something scary and exciting in your story. I admit I plucked bits and pieces from the Mayan’s, Aztec’s, and a few other pre-Columbian cultures. I’m pretty happy the predictions were incorrect and we all woke up to the same old world on December 22, 2012.

I believe that part of what makes the Maya interesting is that they still exist. They are a pre-Columbian culture that managed to escape the fate of so many others. The Maya peoples never disappeared like the rest of those Mesoamerican cultures. They survived the Spanish conquistadores and the subsequent Spanish colonization of the Americas. Today, the Maya and their descendants, form sizable populations throughout Central America and continue with a distinctive set of traditions and beliefs. They merged their pre-Columbian traditions and post-Conquest ideas and cultures. The language, Achí, is still spoken by millions of people. This is quite a feat while their world was in decline.

So why write about the Maya? Where else can you find religion, mythology, folk lore, human sacrifice, Demons, and Gods, all in our own backyard, so to speak? Okay, so I obviously love this stuff. I admit that it’s a little geeky. Honestly, it was one of those moments when all the stars aligned.

To most people these may seem like three totally unrelated events. To a writer they are like manna from heaven. The seed of a story was born and allowed to stew for a while in the darkest part of my brain.

I found thousands of pages of information, theories and speculation about the End of Days on the internet. I found the perfect villain in mictlantecuhtli, the Lord of the Dead. He was the ruler of Mictlan, the lowest and northernmost section of the underworld. He was one of the principal gods. The worship of Mictlantecuhtli sometimes involved ritual cannibalism, with human flesh being consumed in and around the temple.

In Mayan Inferno, Robyn has waited years for her chance to gain revenge on the demons responsible for her enslavement. She’s molded herself into a warrior, and with The Lord of the Dead on the move once again, her time has come and she’s ready to strike—until a band of survivors and their enigmatic leader make her rethink what she’s fighting for.

Breadan has kept the people of his ranch safe from the wrath of The Lord of the Dead. His gift of always knowing what everyone is feeling is instrumental in protecting those around him. The instant connection with Robyn takes his talents to another level.

Passion simmers between them. Neither can avoid their connection, but any distraction could mean disaster. The fate of the world rests on their shoulders, and their lust could be the deadliest distraction of all.

I’m pleased to be giving away a signed copy of Mayan Inferno to one person who comments.