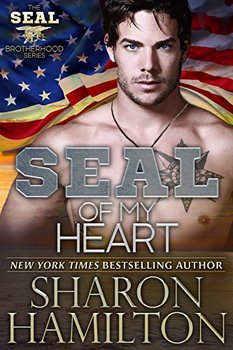 SEAL Of My Heart

SEAL Of My Heart
by Sharon Hamilton

Kate Morgan is engaged to the most eligible bachelor in
Sonoma County, the son of a wealthy wine family in
Healdsburg, California. On a flight to visit her sister in
Portland she is seated next to a young hard-bodied elite
soldier who ignites her insides in a strange attraction she
cannot deny.

Navy SEAL Tyler Gray plans to spend a
weekend home before deploying to North Africa with the rest
of his SEAL Team 3. But the conversation with Kate has him
rethinking his future.

The encounter has both of them
feeling fate has stepped into their lives and altered their
course. Unable to just say goodbye as lovers, they agree to
carry on a correspondence. Kate becomes the girl Tyler wants
to come home to while she is pressured by her family to
reconsider her broken marriage plans.

Family secrets are
revealed from the past regarding a young Marine and
Kate’s mother which brings both heartache and a sense
of clarity as old loves are unearthed. From the grave, a
Marine’s love letters from the past affect the new
love between Kate and Tyler in the present. And when
Kate’s life is endangered, will Tyler be the man to
save her without sacrificing his own?