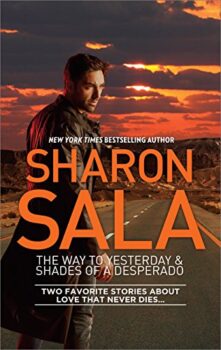 The Way to Yesterday & Shades of a Desperado: An Anthology

The Way to Yesterday & Shades of a Desperado: An Anthology
by Sharon Sala

THE WAY TO YESTERDAY

What if you could turn back time? Suddenly, Mary O'Rourke can---and so her husband and baby girl are alive and well. Now she has to keep them that way. But is this new life---in which they are the family she'd always hoped they could be---a dream? Mary doesn't care. For six years she prayed for a second chance, and she isn't wasting a second of it!

SHADES OF A DESPERADO

Night after night, the visions kept Rachel Brant from sleep---a hard-eyed outlaw straight out of the old West claiming her as his woman. Though she knew it was madness, she longed for that dream to become reality. Then, in one stunning moment, it was---by a flesh-and-blood man who stirred her soul just as her dream lover had.