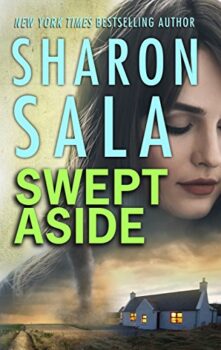 Swept Aside
by Sharon Sala

Shell-shocked after a nightmarish school shooting, Amalie Pope retreats to an aging plantation house near Bordelaise, Louisiana, to heal, physically and emotionally. She's there barely an hour when a tornado rips through bayou country, mercifully leaving the house intact. She's stranded, but unafraid---until a knock on the door.

Four escaped prisoners barge inside, and in an instant Amalie is a hostage again. These men are wounded, desperate and dangerous---with one exception. Undercover DEA operative Nick Aroyo is on the run with the gang he's infiltrated. The only thing he wants more than this collar is to protect fragile, frightened Amalie, who has surrendered herself to his care, body, soul...and heart. But he'll have to play the thug in order to keep her---and his secret---safe, because even though the storm has passed, the danger remains....