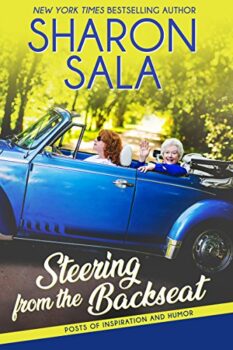 Steering From The Backseat

Steering From The Backseat
by Sharon Sala

There are back seat drivers, and then there are passengers who just want to help you steer. Not really telling you how to drive, but offering up helpful suggestions along the way.

I've never been the bossy kind, but I did need to know where I was going ahead of time, and how to get there.
I don't like surprises, especially behind the wheel, or, riding in the back seat.
I have ONSTAR, which is a GPS, in my car. Her name is Gertie Pearl Sala, aka GPS.
Gertie and I have had some heated discussions along the way, especially when I have to take a detour, of which she knows nothing about.
"Recalculating...recalculating...recalculating."

I hope you enjoy these posts.
I've been saving them for years until I thought the time was right to share.
This year, the time was right, and my daughter was ready for the drive.
She's as steady as a rock, and the most dependable person I know.
But if she loses her way, even for an instant, I'll be in the back seat, helping her steer.