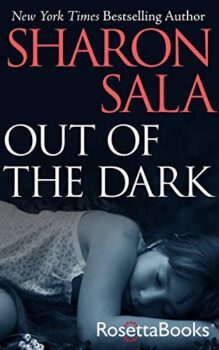 Out of the Dark

Out of the Dark
by Sharon Sala

A beautiful artist is on the run from a cult in this "moving romantic suspense novel" by the New York Times--bestselling author of Snowfall (Publishers Weekly).

When she was a child, Jade's mother took her away from her father and into the cultish world of the People of Joy. Then her mother died, and Jade was subjected to years of horrific abuse by cult members before she finally escaped. Now Jade is on the run---because the People of Joy will stop at nothing to keep their secrets safe. Living on the streets and always on the move, Jade turns to art for salvation and survival.

When Sam Cochrane spots a painting of his vanished wife, he knows the artist can lead him to the girl he's never stopped searching for---his long-lost daughter, Jade. He hires friend and ex-cop Luke Kelly to help find her. Soon Jade and her father are reunited, but as Luke and Jade grow closer, the news of her miraculous return puts them in grave danger...