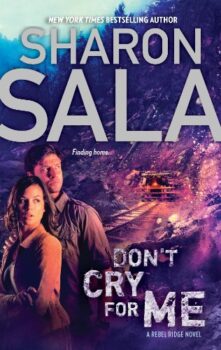 Don't Cry for Me

Don't Cry for Me
by Sharon Sala

Mariah Conrad has come home. Badly wounded on active duty in Afghanistan and finally released stateside, she has no family to call on and nowhere to go---until Quinn Walker arrives at her bedside. Quinn...her brother-in-arms, ex-lover and now maybe her future.

Quinn brings Mariah to his log cabin in the Appalachian Mountains of Kentucky to rest and recuperate both physically and emotionally. While she's incredibly grateful, Mariah is also confused and frustrated. She's always stood on her own two feet, but now even that can literally be torture. She's having flashbacks and blackouts, hearing helicopter noises in the night. She wants to push Quinn away---and hold him closer than ever.

But will she get the chance? Those helicopters are more than just post-traumatic stress; they're real---and dangerous. Bad things are happening on the mountain. Suddenly there's a battle to be fought on the home front, and no guarantee of survival.