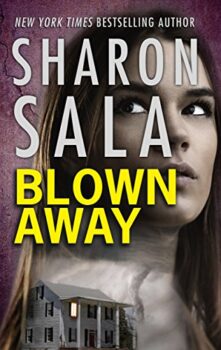 Blown Away
by Sharon Sala

Writer Cari North thought she knew all about plot twists--until she stumbled across her ex-fiancé, Lance Morgan, digging a grave in the Louisiana woods. After a horrifying moment of shared recognition, Cari knew her life hinged upon whether she could outrun Lance and the tornado barreling down on them.

Just when she thinks she's lost Lance and heads home, the storm throws in another twist that will change her fate---forever.

Cari's house, her family---her entire life---have been wiped out. Badly injured and knowing Lance will come after her, she trades clothing and ID with the near-identical cousin who'd been visiting and flees to Baton Rouge. While the world mourns Cari North, she begins an agonizing recovery as Susan---until Susan's boss calls her bluff and finds himself drawn into her incredible tale.

Hunted by a man she once loved, sheltered by a man she hardly knows, Cari chooses to become the bait...and plots the twist of a lifetime to catch a killer.