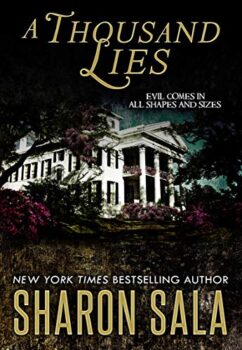 A Thousand Lies
by Sharon Sala

A son confronts the sins of his father in this electrifying page-turner from the New York Times--bestselling author of Whippoorwill.

The product and heir of old money, Anson Poe hides behind a handsome face as he wreaks havoc upon those around him---his only goal is to satisfy his own devious desires. Nothing touches his heart but power and greed; not the woman he married or the four children they share.

Brendan Poe shares his father's stunning looks, but not his manner. He can only try to live down the shame, doing his best to stay out of Anson's world of crime... until one hot Louisiana summer he can no longer look away.

When the women who matter most in Brendan's world become pawns in Anson's need for revenge, Brendan strikes back with a blinding rage, leaving his father with two options: fight or flight.

A powerful story about what we'll do to protect those we love, A Thousand Lies will keep you up long after you finish the last page.