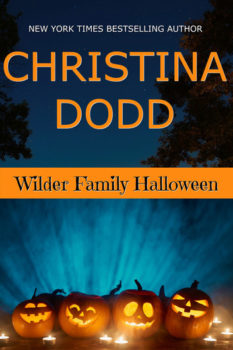 Christina Dodd here:
WILDER FAMILY HALLOWEEN is a short epilogue featuring the Wilder family from my paranormal series, Darkness Chosen, and you can read it for free on my website at christinadodd.com. This short story is my gift to you, to thank you for taking the Wilder family into your hearts and homes. Of course, readers who want to add it to their collection can buy it here.

Should you read WILDER FAMILY HALLOWEEN if you haven't read Darkness Chosen? You are welcome to, of course, but it's not going to mean much without knowing the characters. If you would like to discover the Darkness Chosen series, there are free excepts for each book on my website.The Darkness Chosen books are (in order):
SCENT OF DARKNESS: Classic romance between a secretary who hopelessly loves her boss...only to discover he's a shapeshifter. Oops.
TOUCH OF DARKNESS: A deception threatens the love between a woman determined to reveal the evil that killed her family ... and the man who has shares those unholy gifts.
INTO THE SHADOW: Bad boy shapeshifter brought to his knees by the woman he should never love.
INTO THE FLAME: As the Wilder family saga sweeps into its stunning climax, the only Wilder daughter realizes the lie she has lived ... and discovers a love lost.

My second paranormal series, the Chosen Ones, features Aleksandr Wilder of the famed Wilder family Darkness Chosen saga.The Chosen Ones are (in order):
STORM OF VISIONS: A bodyguard must guard the woman he loves. But he can't guard her from her own visions ... or her duty.
STORM OF SHADOWS: Clueless librarian turned reluctant adventurer by a mysterious man with...talents.
CHAINS OF ICE: A wild man must be tamed and returned to do his duty to the Chosen Ones, and only one woman has the strength -- and love -- to succeed.
CHAINS OF FIRE: Two people trapped together in an icy cave, and only the heat of their lost love can warm them...
STONE ANGEL: The one man who can save her is the man who broke her heart...and betrayed her. WILDER: Classic beauty and the beast: Aleksandr Wilder's story, the grand finale of the Chosen Ones, and the story that unites Darkness Chosen with the Chosen Ones.

However you read WILDER FAMILY HALLOWEEN, I hope you enjoy re-uniting with the Wilder family once more!

Warmly, Christina Dodd, who would love you to join her mailing list to hear about new releases and book sales.

A Pirate's Wife For Me
Governess Brides Book 11

Chains of Ice
Chosen Ones Book 3

Storm of Shadows
Chosen Ones Book 2