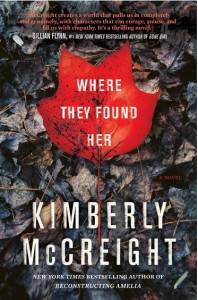 As someone who can attest to the page-turning reads that are The Hunger Games and Divergent trilogies but who has always worried about what the fascination with dystopia says about teen readers, I couldn’t resist the opportunity this week to see if any changes were afoot in what YAs were reading.

For my answer, it seemed only logical to ask one of the youngest bookstore owners in the country:  Elena Hight, the 25-year-old co-owner of Best of Books in Edmond, Oklahoma.

Hight was quick to confess her own reading is “all over the place” but leans to psychological thrillers, such as Gone Girl and The Girl on the Train, along with YA sci-fi.

Her author of the moment?

Kimberly McCreight, the New York Times bestselling author of Reconstructing Amelia, a novel that marries a crime story with a relationship drama that was nominated for an Edgar Award for Best First Novel and named Entertainment Weekly’s Favorite Book of the Year.

McCreight’s newest book, Where They Found Her, a multigenerational mystery, goes on sale April 14.

“McCreight only has two books,” says Hight, but she swears by both.

As for YA in general, Hight says she gets a kick out of the genre being dominated by great women writers.

“It is so wonderful,” she said, and not enough is made of it.

As for the young people combing the aisles of her store, Hight says they are increasingly choosing titles that explore “real-life situations” that double as “great reads”—new books such as Jennifer Niven’s All the Bright Places, which came out in January, but also books that have gained a loyal following in recent years, such as Jay Asher’s Thirteen Reasons Why, which explores teen suicide, and John Green’s The Fault in Our Stars, which tells the story of a teen dying of cancer that was made into a well-received 2014 movie (made for $12 million, it was No. 1 at the box office its opening weekend and went on to gross more than $266 million).

Serious in their own way, yes.  But served up with a dollop of hope and wry humor—the secret ingredients that have always allowed readers to emerge from a serious read with something more akin to inspiration than cynicism.

As for those of you who don’t fall into the “adults who read YA fiction,” Hight recommends #1 New York Times bestselling Australian author Liane Moriarty’s newest book, Big Little Lies, or her much admired novel The Husband Secret.

Which compels me to ask:  Do you like your women’s fiction served up with a dash of domestic drama?