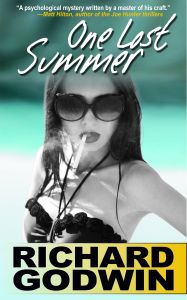 One Lost Summer is in many ways a novel about identity and lies. It is about the lies people tell themselves to survive and the extent to which they may remain unknown in a person’s character and by those closest to them. It is about desire and obsession and it is about summer and the secrets your neighbour carefully hides from you while he or she keeps up a facade.

This is a brief synopsis of the novel:

Rex Allen loves star quality in women. He moves into a new house in a heat wave with few possessions apart from two photographs of his dead daughter. His next door neighbour, beautiful Evangeline Glass invites him over to one of her many summer parties, where he meets her friends and possessive husband Harry. Rex feels he knows Evangeline intimately. He starts to spy on her and becomes convinced she is someone other than who she pretends to be. When he discovers she has a lover, he blackmails her into playing a game of identity that ends in disaster.

One Lost Summer is attracting some great reviews. Reviewers are commenting on its tight suspense and haunted feeling, as well as the intense drama that plays itself out between Rex and Evangeline and the breathtaking ending. The narrative contains many surprises, not least those that come from Rex’s past. But there are also the surprising revelations that occur in his meetings with Evangeline, who he lures to his house once a week for two hours to act out the part of Coral, a woman who remains a mystery until the end. She may be nothing more than a figment of Rex’s imagination or she may be Evangeline’s alter ego.

The central characters are altered by the sequence of events one torrid summer. One of the things I wanted to explore when I wrote One Lost Summer was the extent to which the irrational governs peoples’ lives. And obsession is a key theme in the novel. It is there in Rex, the first person narrator of the novel, as this passage shows:

“Obsession is not a modern disease. Its roots lie deep inside humanity and may be the reason we’re here. You don’t know you’re obsessed until you can’t move, until all you see is   the one thing. By then the tendrils have wrapped themselves around your unsuspecting heart. They’re delicate at first in their unfolding, touching you in the dark, like the soft caress of a lover at dawn. Then you know they’re squeezing the blood out of you. And you realise you will have to hack them away, and with them some living beating part of yourself to be free.

I held the camera and captured her image again and again that intoxicated summer when music filled the gardens of Broadlands Avenue, and Evangeline was high forever.

Stars have a rare quality, an ability to take away the smallness most men feel. They’re more corrupt than us, but the corruption is better hidden, and their appeal is a lie, the biggest drug you will ever know.

Evangeline was a complete balance of all the qualities famous stars have. She knew she was a rare flame.

All that summer I watched her. I caught her laughing, smiling, looking away from Harry, alone, contemplating her day. I took her with shopping bags on the empty drive next door, and I filmed her sunbathing by the pool, her body tanned and glowing in the unnatural sun that seemed to set that time apart. For she seemed to exist outside time. And I captured her and made her mine.

I spent my evenings with a glass of Montrachet chilling my tongue as I sipped her image from the Plasma screen in my living room. I fed on her. The X bridged the space between us. I zoomed in on her, caressing her skin with the lens. I entered her world like a hummingbird penetrating a flower, my heart beating like rapid wings. She existed in my watchfulness and awoke my desire. When I wasn’t filming her, time was static. There were no clocks in The Telescope. I felt erased when I wasn’t watching her image. My house had no past and no future.

I tidied away unpacked boxes, placing them in cupboards. I never used most of the rooms, existing in solitude, with only the films I took. And I felt more and more that I was part of a plot, and my only defence against it was the camera, as if Evangeline and Harry knew things that they were keeping from me and the X would find them out. I felt chilled, as if some lost piece of knowledge was frozen inside me. Sometimes at night as the Glenfarclas wore off I could hear icebergs breaking in the distance, and then the notes of Fleetwood Mac’s “The Chain” would stab at my brain like shards of glass against a nerve.” 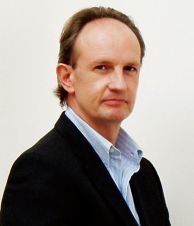 One Lost Summer is available at all good retailers and online at Amazon.com, Amazon.co.uk , The Book Depository, and Waterstones.

You can find out more about Richard Godwin at his website: www.richardgodwin.net/ 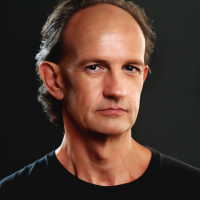 Richard Godwin is the author of critically acclaimed novels One Lost Summer, Apostle Rising and Mr. Glamour. One Lost Summer is his third novel. Set in a heat wave, it is very much a summer read, a Noir story of fractured identity and ruined nostalgia and available at all good retailers and online. He is also a published poet and a produced playwright. His stories have been published in over 29 anthologies, among them his anthology of stories, Piquant: Tales Of The Mustard Man. Apostle Rising is a dark work of fiction exploring the blurred line between law and lawlessness and the motivations that lead men to kill. Mr. Glamour is about a world of wealthy, beautiful people who can buy anything, except safety from the killer in their midst. Richard Godwin was born in London and obtained a BA and MA in English and American Literature from King's College London, where he also lectured. You can find out more about him at his website www.richardgodwin.net , where you can also read his Chin Wags At The Slaughterhouse, his highly popular and unusual interviews with other authors.

ONE LOST SUMMER AND IDENTITY

4 thoughts on “ONE LOST SUMMER AND IDENTITY”

My great grandma climbed the Matterhorn in her 80s or 90s. I'd love to be able to do something like that. It's impressive.

There are about 300 dead frozen bodies on Everest going back many years. There are expeditions just to go up and retrieve the bodies of family members - costs about $100,000 per body. Horrible.

Statistically, you're much more likely to die a gruesome death in your jammies, reading, than you are on Mt. Everest. Altitude sickness is nothing compared with Jason breaking into your house and turning you into chutney.

my sister climed mt kilimajaro. that one thing in the middle of africa. she showed us pictures, heres day one, day two. ok. dirt, day three dirt. i never saw the point. it was a rock