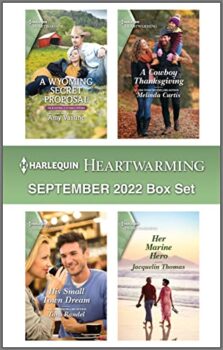 Harlequin Heartwarming celebrates wholesome, heartfelt relationships that focus on home, family, community and love. Experience all that and more with four new novels in one collection!

After an accidental Vegas wedding, Wyatt Blackwell and Harper Hayes end up in Eagle Springs. He's trying to save his family's ranch. She's trying to save her online image by playing happy family. Will they end up saving each other?

Orphan Maxine Holloway and her daughter are spending Thanksgiving with the Monroes---who seem entirely too warm and boisterous. And there's something about Bo Monroe. He is Max's complete opposite, but could he be her perfect match?

Businessman Adam Wright went from Wall Street to wilderness expeditions after his broken engagement. Marketing exec Carrie Mitchell is just passing through, chasing the corporate dreams Adam left behind. Will an unexpected connection make her want to stay?

Fashion designer Renee Rothchild has one rule---don't date military men. Too bad she's falling for marine Greg Bowman. With his discharge coming, she's ready to give love a second chance after a broken engagement. Until unexpected news changes everything.

Look for 4 compelling new stories every month from Harlequin Heartwarming!