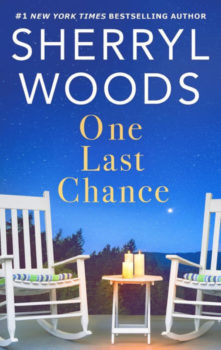 One Last Chance
by Sherryl Woods

Karen Hanson’s oldest friends, the Calamity Janes, urged her to sell her struggling ranch and pursue her lifelong dreams of travel. But the only bidder for her land was brooding, enigmatic Grady Blackhawk — her late husband’s worst enemy. How could she sell the land to him?

Then Grady set out to prove that he wasn’t the scoundrel Karen thought him. Spending time with him might cost Karen a lot more than her ranch because Mr. Blackhawk was becoming less interested in claiming her land…and more intent on claiming her heart.