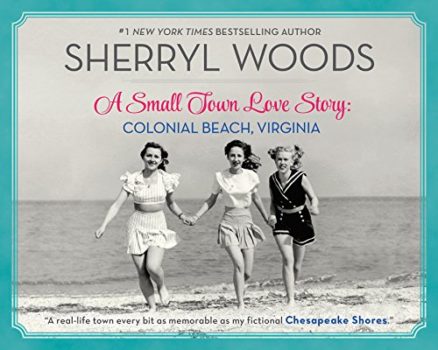 Rich in narrative history and local color, A Small Town Love Story: Colonial Beach, Virginia is a homage to the town of Sherryl Woods’s past summers, a place that stole her heart long ago and provided the basis for the many fictional small towns in her bestselling novels.

True to Woods’s signature style of focusing on characters who are at the center of their communities, here she has woven together the stories of the very real people who helped shaped this seaside Virginia town. She brings us back to the days of her own family dinners—relatives of all ages crowded onto benches around a long, banquet-length table, windows open to the hot breeze as they cracked open piles of Maryland blue crabs. She artfully captures the essence of Colonial Beach and makes us yearn for small-town life.

Woods’s own memories frame the dozens of other true stories she features—from the unique history of Colonial Beach itself, to some firsthand accounts of the Oyster Wars that once consumed the fishing community, to the stories of neighborhood merchants who made it a point to know just about every customer by name. In its early days, even a town as small as Colonial Beach had family-owned grocery stores in just about every neighborhood, each with its own personality—stores like Denson’s and Sullivan’s and Ethyl’s Emporium. From farmers and fishermen to restauranteurs and hoteliers to pastors, librarians and military folk, Woods’s research and interviews give life to the personalities of a very special place.