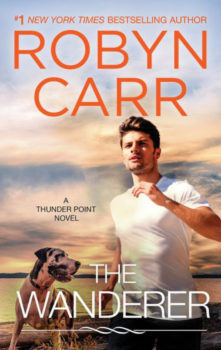 The Wanderer
by Robyn Carr

Welcome back to Thunder Point! Return to where it all began, in the first book of the beloved series by #1 New York Times bestselling author Robyn Carr. You’ll fall in love with this small town filled with people and stories you’ll never forget.

Nestled on the Oregon coast is a small town of rocky beaches and rugged charm. Locals love the land’s unspoiled beauty. Developers see it as a potential gold mine. When newcomer Hank Cooper learns he’s been left an old friend’s entire beachfront property, he finds himself with a community’s destiny in his hands.

Cooper has never been a man to settle in one place, and Thunder Point was supposed to be just another quick stop. But Cooper finds himself getting involved with the town. And with Sarah Dupre, a woman as complicated as she is beautiful.

With the whole town watching for his next move, Cooper has to choose between his old life and a place full of new possibilities. A place that just might be home.

What We Find
Sullivan Crossing Book 1