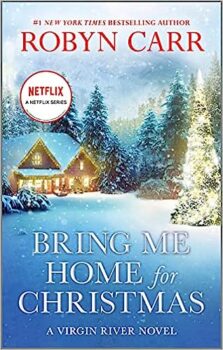 Bring Me Home for Christmas

Bring Me Home for Christmas
by Robyn Carr

Come back to celebrate the holidays in Virgin River, the beloved town from the series by #1 New York Times bestselling author Robyn Carr.

This year, Becca Timm knows the number one item on her Christmas wish list’getting over Denny Cutler. Three years ago Denny broke her heart before heading off to war. It’s time she got over her silly college relationship and moved on.

So she takes matters into her own hands and heads up to Virgin River, the rugged little mountain town that Denny calls home, as an uninvited guest on her brother’s men-only hunting weekend. But when an accident turns her impromptu visit into an extended stay, Becca finds herself stranded in Virgin River. With Denny. In very close quarters.

As the power of Christmas envelops the little town, Becca discovers that the boy she once loved has become a strong and confident man. And the most delicious Christmas present she can imagine.