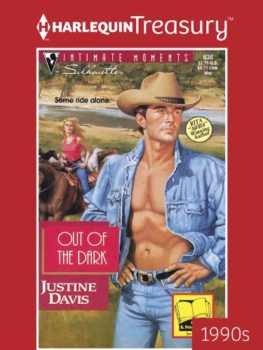 Out of the Dark

Out of the Dark
by Justine Davis

Horse trainer Victoria Flynn had learned the hard way that good-looking men just plain couldn't be trusted. But she was in big trouble and she had nobody to turn to but a man who was too damn handsome for her own good---a long, lean Texan with a lazy smile, and strangely haunting eyes.

A lifetime's worth of hard lessons had taught Cole Bannister never to let anybody get too close---but Tory Flynn wasn't making it easy. The rodeo- star-turned-private-investigator was ready to help her find out who was out to destroy her ranch---but he wasn't ready for the way she made him dream of changing his solitary ways....
(originally published in Silhouette Intimate Moments #638, 05/95)