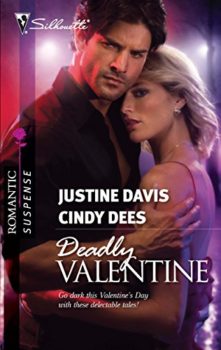 Her Un-Valentine by Justine Davis

When she’s kidnapped, Taylor Burke is shocked to see her new coworker, Angus Kincaid, holding the gun. She later kisses him just to aggravate his partner and is even more shocked that she likes it. Could she be falling for the bad guy, or does Kincaid have other surprises up his sleeve?

Colt McQuade is a soldier with a secret, and Layla Freeman is the one person who can unravel it. But someone else wants the information, too, sending the couple on the run. They’ll do everything they can to protect Colt’s precious knowledge—and guard their hearts in the process.