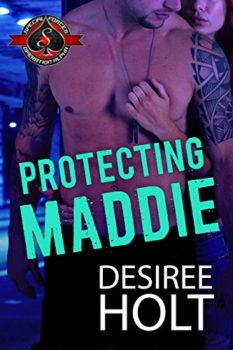 When Maddie Winslow talked a student out of his gun in her classroom, she never figured it would set off a chain of events that put her life in grave danger, and the lives of her parents.

Hiding in WitSec for thirty years, her parents thought they had beaten the odds—until the image of Maddie, an identical replica of her mother—hits the television airwaves and the people who have been seeking revenge all these years find her. Intent on learning where her mother is hiding, they break into her home and then try to kidnap her. Frightened, she goes to her friend, Zee, who once dated someone in Delta Force. She calls him to explain her friend’s situation, but he’s prepping for a mission and can’t leave the base.

Hunter “Hawkeye” St. John, a Delta Force team member, is on medical leave recuperating in Tampa and chafing for some action. When he and Maddie meet, the sparks flying between them sizzle the air. But if Hawkeye wants to move forward with Maddie he first has to keep her safe and then eliminate the bad guys.

***This book was previously published in Amazon Kindle Worlds***