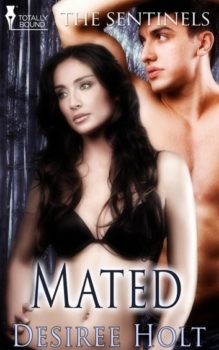 Cale Martin knew at once Linnea Porter was his mate, but could he convince her in the midst of turmoil?

When The Sentinels agreed to look into the disappearance of Linnea Porter's sister, Cale Martin was tagged as the lead. He didn't know what he expected the first night he showed up at Linnea's, but a surge of lust wasn't on his list. Nor did he expect his inner wolf to reach out to her.

For Linnea, fascinated by shapeshifters, Cale called to something primitive inside her. As they focused on finding her sister, the bond between them continued to grow. Was it possible that this shifter and this human were meant to be...mated?

Reader Advisory: This book is best read in sequence as part of a series, although it can be read as a stand-alone title.