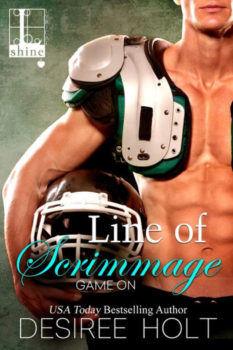 Line of Scrimmage
by Desiree Holt

Sometimes it’s not about winning…

One bad tackle. That’s all it took to put wide receiver Jake Russell in a cast for the rest of the NFL season. From being a high school all-star to getting drafted by the Austin Mustangs, football has been Jake’s life for as long as he can remember. It’s what defines him—because he has a secret he never shares. But now that he’s laid up in bed with a nurse displaying a lot of distracting bedside manners, he’s discovering life on the sidelines might have its perks. . .

One last paycheck. That’s all Erin Bass has left to her name when the resort she works at shuts down. Desperate, she agrees to be a caregiver to hardass jock Jake Russell, who also happens to be a memorable one-night stand. Before long, caring leads to daring new ways to catch up in bed, especially with Jake still in a cast. But with football on the sidelines, this time the game is serious. . .