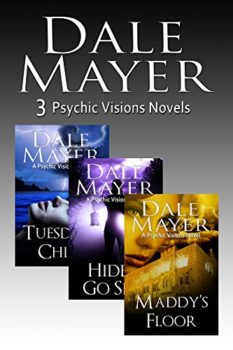 This is the first three books of the best selling Psychic Vision series bundled together into one volume. This is a paranormal romantic suspense/thriller series.

TUESDAY’S CHILD
What she doesn’t want…is exactly what he needs.

Shunned and ridiculed all her life for something she can’t control, Samantha Blair hides her psychic abilities and lives on the fringes of society. Against her will, however, she’s tapped into a killer—or rather, his victims. Each woman’s murder, blow-by-blow, ravages her mind until their death releases her back to her body. Sam knows she must go to the authorities, but will the rugged, no-nonsense detective in charge of tracking down the killer believe her?

Detective Brandt Sutherland only trusts hard evidence, yet Sam’s visions offer clues he needs to catch a killer. The more he learns about her incredible abilities, however, the clearer it becomes that Sam’s visions have put her in the killer’s line of fire. Now Brandt must save her from something he cannot see or understand…and risk losing his heart in the process.

As danger and desire collide, passion raises the stakes in a game Sam and Brandt don’t dare lose.

HIDE’N GO SEEK
A twisted game of Hide’n Go Seek forces an unlikely alliance between a no-nonsense FBI agent and a search-and-rescue worker.

Celebrated search-and-rescue worker Kali Jordon has hidden her psychic abilities by crediting her canine partner Shiloh with the recoveries. But Kali knows the grim truth—The Sight that she inherited from her grandmother allows her to trace violent energy unerringly to victims of murder. No one knows her secret until a twisted killer challenges her to a deadly game of Hide’n Go Seek that threatens those closest to her.

Now she must rely on FBI Special Agent Grant Summers, a man who has sworn to protect her, even as he suspects there’s more to Kali and Shiloh than meets the eye. As the killer draws a tighter and tighter circle around Kali, she and Grant find there’s no place to hide.

Are her visions the key to finding the latest victim alive or will this twisted game of Hide’n Go Seek cost her…everything?

The terminally ill fight to get into her ward. Once there, many miraculously…live. So when her patients start dropping and she senses an evil force causing their deaths, she calls on her friend and mentor, Stefan, for help. Together, they delve beyond the physical plane into the metaphysical… Only to find terror.

She wants to save everyone, but are some souls not meant to be saved?

Detective Drew McNeil has two family members in need of Maddy’s healing care, but his visits to her facility leave him wondering — who cares for Maddy? Bizarre events on her floor raise his professional curiosity. And the more time he spends with Maddy, the more personal everything becomes. When the deaths on Maddy’s Floor intersect with one of his cold cases, he realizes an old killer has returned — and Maddy’s standing in his path.