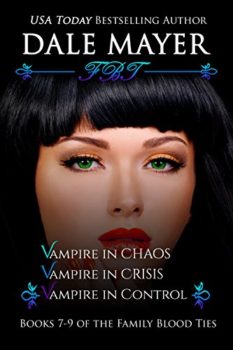 This is a collection of 3 books in the Family Blood Ties series. These books are:

Tessa’s life has plummeted into chaos. Her father is missing, Goran is unconscious and showing no signs of healing, her mother has taken several steps off the deep end and David, well, she’ll deal with him when she sees him — if she can find him. Cody isn’t sure what happened to the supposedly successful conclusion to the blood farm madness but he’s back in hell and damn it Tessa is once again leading the charge. Jared is on the run, again. With no one else he can trust, but Tessa’s friends and family, he searches them out determined to help them solve this war — whether he is welcome or not. With everyone in distress or missing, Tessa struggles to find answers, and create some kind of order amongst the chaos — before their attackers strike again.

Tessa’s world exploded. She survived Deanna’s inheritance. She sees more, hears more … understands more. But more is not always better. Cody doesn’t like what’s happening around him. Tessa has walked through hell and she has a lot more to go before she’s clear. He plans on standing by her side — her guardian — whether she wants him to be there for her or not. Jared can’t believe all trails lead him into trouble. He’d escaped once. Tried to stay out of the mess since. But a friend is missing, and when he tries to get help, the person he confides in goes missing too. The vampire world was never ready for Tessa before. The new Tessa? No one is ready for her.

Life couldn’t be any worse… Caught in a web of Deanna’s making Tessa struggles to find her role in this new reality. Cody can’t believe how quickly his life has deteriorated. He believes in Tessa. Knew she had what it took and is desperate to do what he can to save her. Only there are secrets, and like poison, fester until they are released. Tessa and Cody have to find their way through the maze of lies and deceit to a safe haven on the other side. The whole gang is caught in life and death struggles as they near the end of this war. But how close are they and who will survive?