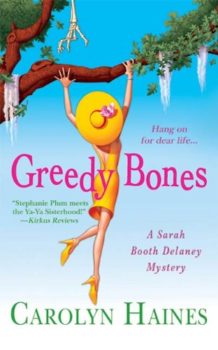 Sarah Booth Delaney, a Southern belle known for abiding by tradition only when it suits her, is no stranger to drama. A talented actress and a P.I., she’s chosen to pursue a career in Hollywood when she hears that her best friend’s husband is suddenly on his deathbed back home in Mississippi—and he’s not the only one. The vicious illness begins with burning fevers and delirium, quickly plunging its victims into a coma. The Centers for Disease Control is on the scene, but they can’t find a cure for it or the boll weevils that are decimating Sunflower County’s cotton crop. With patients in quarantine and the whole town in crisis, Sarah drops everything to stop the outbreak and save the only place she’s ever been able to call home.

From feuding scientists to ailing locals, there is no shortage of bad blood coursing through the little town of Zinnia, Mississippi, as Carolyn Haines’s often steamy and always charming series turns equally intense in Greedy Bones.