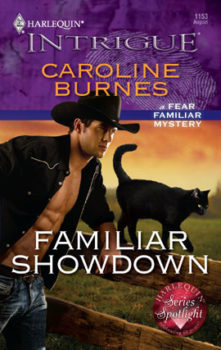 Good thing I have nine lives.... But it's too bad Stephanie Ryan doesn't have as many lives as me. The humanoid horse gentler is up to her pretty neck in trouble--thanks to drifter cowboy Johnny Kreel. He shows up, and just like that, someone tries to kill her. Stranded on her ranch in Nowhere, South Dakota, she's a sitting duck. I'll just bet my next meal that dark-side Johnny knows more than he's telling. And unless my green eyes deceive me, are those sparks between them? Good thing for Stephanie I'm Familiar, Black Cat Detective. I haven't met a case I couldn't solve...yet.