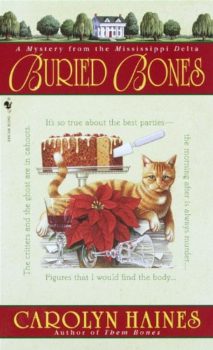 Private investigation isn’t on the list of a southern belle’s most desirable accomplishments—but it’s saved Sarah Booth Delaney’s Delta homestead. Now all she has to cope with is its bossy antebellum ghost who is determined to save Sarah—from spinsterhood. Then comes the perfect social occasion: Lawrence Ambrose’s dinner party…

Ambrose, once a famous man of southern letters, is planning a comeback: a delicious tell-all with a bitchy ex-model as his “biographer.” As he taunts his dinner guests with the news that his book will blow the lid off Zinnia’s darkest secrets, it becomes plain that each and every guest has a secret—and wants Ambrose to keep it. When the morning-after mess includes a bloody corpse and the manuscript of the biography disappears, Sarah Booth goes digging for answers. But many who hold them are six feet under—or soon will be—and if she doesn’t tread carefully, she could join them any day now…