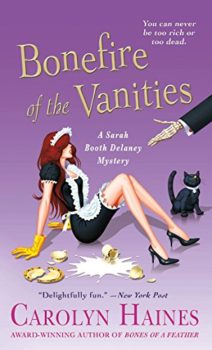 Bonefire of the Vanities

Bonefire of the Vanities
by Carolyn Haines

A porn-star-turned-psychic has made a business of reuniting grieving relatives with their dearly departed and it’s up to detective Sarah Booth to find out…why? Her claim to beyond-the-grave fame aside, there’s something suspicious about medium Sherry Westin, since all of her clients happen to be Southern billionaires. Is she preying on the emotionally vulnerable for profit? Or is something far more sinister in store?

Take Marjorie Littlefield. Sarah Booth is convinced that Sherry is scheming to steal away Marjorie’s fortune from her sole heir: a cat. Soon Sarah Booth is on the case, posing as a maid at Marjorie’s estate. Between chores, she searches for clues of psychic manipulation, mingles with the other staff, and, lo and behold, finds a few dead bodies. With spooks and charlatans around every corner, which guest or staff member might be the killer? Even Jitty, Sarah Booth’s personal haint, won’t tell until Sarah Booth has uncovered all of Sherry’s well-kept secrets. Before it’s too late…