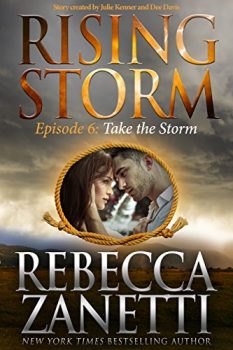 Take the Storm
by Rebecca Zanetti

Welcome to Storm, Texas, where passion runs hot, desire runs deep, and secrets have the power to destroy... Get ready. The storm is coming.

Marisol Moreno has spent her youth taking care of her younger siblings. Now, with her sister, Ginny, in crisis, and her brother in the throes of his first real relationship, she doesn't have time for anything else. Especially not the overtures of the incredibly compelling Patrick Murphy.