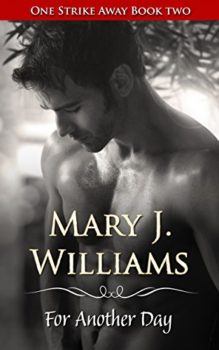 One Strike Away Book 2

For Another Day
by Mary J. Williams

One of the best second basemen in the game, he’s overcome a lousy childhood to achieve his dreams. Fame. Fortune. A World Series championship. But when his beloved mother dies she leaves behind a cryptic letter that leads to questions Nick can’t ignore, opening wounds long healed but never quite forgotten.

Rowan Cartwright thought she had everything she ever wanted.

After years of hard work, her landscaping business is thriving. She has good friends. A good life. She would have sworn nothing was missing.

Until she met Nick Sanders.

Funny. Exciting. Sexy. How could Rowan resist? Why would she want to? She knew she wouldn’t have him in her life for long, but while she did she planned on enjoying every second.

Nick came looking for answers to his past. He didn’t expect to find a woman like Rowan. He’d known desire. What she made him feel was different. Intense. And scary as hell. He wanted more than he had the right to ask.

Dark secrets swirled around them. Secrets that threatened to tear Rowan’s family apart.

Could Nick find his answers without hurting Rowan in the process? And could he convince her that he wanted more than a few days of passion?

Nick wanted Rowan. Now. Tomorrow. Always. Making her believe would be the greatest challenge of his life.