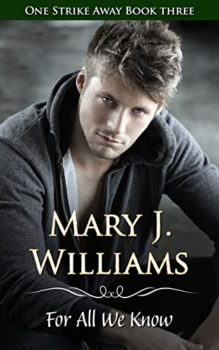 For All We Know

One Strike Away Book 3

For All We Know
by Mary J. Williams

August brings a major milestone in my writing career. FOR ALL WE KNOW is book number 20!!!

And what a ride it is.

Travis Forsythe grew up with big dreams. He had the talent, drive, and ambition to make those dreams a reality. His sights were set on playing major league baseball. And nothing would stand in his way.

Delaney Pope had dreams of her own. Unlike Travis, she didn’t have a specific goal in mind. All she wanted was to get away from Green Hills, South Carolina and the biggest threat to her future. Her stepfather.

The jock and genius. They became unlikely friends. Travis pulled Delaney out of her shell. Delaney gave Travis someone to hold onto when his world fell apart.

A secret marriage that was never supposed to be real. They said I do, then said goodbye.

Eleven years later, fans and critics agree—Travis Forsythe is the best shortstop in the game. He hasn’t forgotten Delaney. However, their lives have taken very different paths. When he gets word that she’s returned to their hometown—the one place she promised him she would never go—he realizes the time has come to confront the past—once and for all.