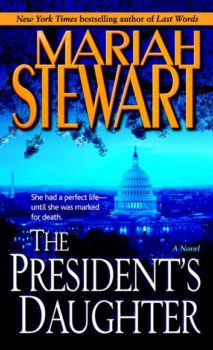 The President's Daughter
by Mariah Stewart

Dina McDermott is on top of the world. Attractive and independent at thirty, she runs her own business, funded by a generous inheritance. But an explosive chain of events will soon be set into motion---and her perfect life will spin out of control.

A journalist with a fearless instinct, Simon Keller believes he's struck gold when he unearths an unsettling story about former president Graham Hayward, one that started with a secret affair and ended in tragedy. The trail leads Simon to Dina McDermott's front door---and threatens to expose a parentage that would rock the political world. Shaken to her core by a shattering truth, Dina is suddenly thrust into the crosshairs of a cold-blooded killer---and on the run of her life.