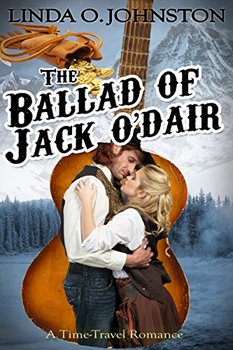 The Ballad of Jack O'Dair

The Ballad of Jack O'Dair
by Linda O. Johnston

A brawny bear was Jack O'Dair…

Present day folk singer Jessie Jerome is haunted by the beginning of The Ballad of Jack O’Dair, about an Alaskan lawman in Gold Rush days. Determined to learn the ending—and whether Jack died in an avalanche—she travels to Alaska, and is shocked not only to hear more of the ballad but to be transported back in time to the Gold Rush. She’s even more shocked to actually meet the real Jack O’Dair—and falls for the strong, sexy man who will stop at nothing to enforce the law and protect people, as well as ensure supplies can reach those searching for gold. But if she finally hears the end of his ballad, will she be transported back to her own time? More importantly, will Jack survive? And can she live without him?

Readers of favorite new and classic time travel romances such as those of Diana Gabaldon, Sarah Woodbury, Karen Marie Moning and most especially Gwyn Cready will love The Ballad of Jack O’Dair!