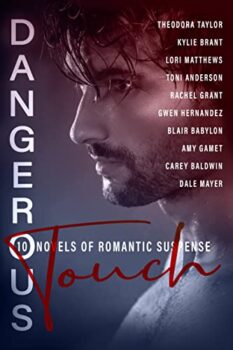 DANGEROUS TOUCH is a limited-time boxed set collection of 10 full-length Romantic Thriller & Mystery novels by some of the most exciting authors in the genre.

A gripping collection that will keep you on the edge-of-your-seat as your heart pounds in anticipation. Perfect for fans of Laura Griffin, Nora Roberts, and Rebecca Zanetti.

Deep As The Dead — Kylie Brant

When Dr. Alexa Hayden becomes a serial killer’s newest obsession, she and Sergeant Ethan Manning have to confront their painful past to predict the criminal’s actions. The Tailor will leave no sin unpunished, and his unholy crusade has marked Alexa for death.