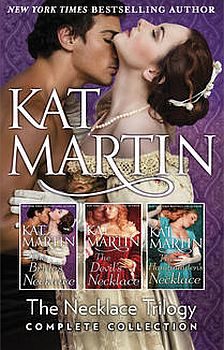 Rediscover this thrilling historical romance trilogy by bestselling author Kat Martin, together in one set for the first time!

Victoria Temple Whiting snatches the family’s heirloom necklace to pay for her and her sister’s escape to London. There, she poses as a servant in the household of handsome Cordell Devlin, the scandalous Earl of Brant, who is in need of a new mistress and intrigued by Tory’s wit.

British privateer Ethan Sharpe plans to humiliate his enemy by seducing headstrong and lovely Grace Chastain, and he makes her a prisoner aboard his schooner. Now Ethan must decide: can he settle the demons of his past and follow the destiny his heart commands?

When Rafael, Duke of Sheffield, discovers that he was cruelly tricked and that Danielle Duval was never unfaithful, he’s desperate to win her back. But Dani is already on a steamer bound for America to marry another man. Impulsively, Rafe follows her…