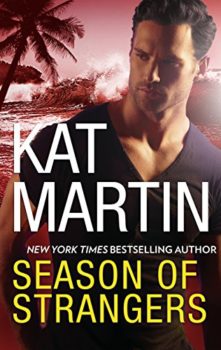 Season of Strangers
by Kat Martin

Real estate agent Julie Ferris is enjoying a day at the beach with her sister Laura when a strange, almost undetectable charge fills the air. Then, under the hot Malibu sun, time stops altogether.

Neither sister can explain their “lost day”—nor the blinding headaches and horrific nightmares that follow—but Julie chalks it up to the stress she’s been under since her boss’s son took over Donovan Real Estate.

Patrick Donovan would be a real catch if not for his notorious playboy lifestyle and matching attitude. But when a cocaine-fueled heart attack nearly kills him, Patrick makes an astonishingly fast—and peculiar—recovery. Julie barely recognizes the newly sober Patrick as the same man she once struggled to resist. Maybe it’s the strange beach experience fueling her paranoia, but she can’t help sensing something just isn’t…right.

As Julie’s feelings for Patrick intensify, she’s about to discover how that day at the beach links her newfound happiness with her wildest suspicions…