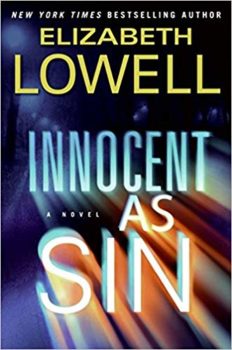 Innocent as Sin
by Elizabeth Lowell

Kayla Shaw is a private banker in Arizona---smart and capable but underpaid and underappreciated. Rand McCree is a haunted man who paints landscapes in the Pacific Northwest, burning with a need for answers about the terrible event that shattered his world. They are two strangers with nothing in common . . . until their lives entwine---and explode.

On what at first appears to be an ordinary day, everything changes for Kayla, as she barely escapes a kidnapping attempt and finds herself accused of a shocking crime: the illegal laundering of hundreds of millions of dollars. Damned by lies and false "evidence," she is trapped with no place to run.

After five agonizing years, Rand has finally been offered what he desires the most: the name of his twin brother's murderer. Hungry for vengeance, he accepts a job with St. Kilda Consulting that will place him in the killer's orbit . . . and tantalizingly close to Kayla Shaw. The cold-blooded international criminal responsible for Rand's brother's death has targeted Kayla as his next victim. Since she can't turn to the police, who believe she's guilty as sin, she must place her life in the hands of the shadowy, secretive man who has come out of nowhere to protect her.

Suspicious of each other, needing each other, they are two against the world---with unknown enemies on all sides and even the government itself suspect---as the violence of the past erupts in the present. And now innocence alone will not be enough to keep Kayla Shaw alive. . . .