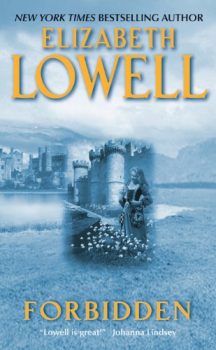 A medieval age of passion and conquest—a tumultous era of warriors and ladies...and noble hearts inflamedby desireand duty—is brought to a sumptuous life through the storytelling mastery of Elizabeth Lowell, the New York Times bestselling creator of incomparable romantic adventure.

They call her "Amber the Untouched" throughout the disputed lands—a chaste, golden-haired beauty who fears the remarkable love that was prophesied at her birth...and the death that must inevitably follow. Now Duncan has come to her in darkness, as was foretold—a wounded warrior with no memory, seared by passion's fire and irresistibly drawn to the innocent enchantress who divines truth with touch.

Their romance is legend in a time of war. But when Duncan's memory returnes, he sees Amber as his enemy. Still, he cannot forsake the lover who healed his body and heart. And he will defy to the death the dread forces that have proclaimed their love...