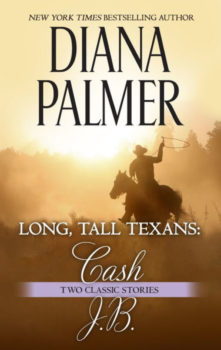 Cash and J.B.
by Diana Palmer

Police chief Cash Grier makes it his personal mission to keep law and order in the streets of Jacobsville. As a true renegade, Cash has learned never to take anything at face value—especially not his gorgeous sworn enemy, “Georgia Firefly” Tippy Moore. The hard-edged Texan finds himself powerless to resist their explosive chemistry, a betrayal leads to despair—and unexpected danger. Now all roads lead to this one pivotal moment that will test the very fabric of a love that had once known no bounds….

Wealthy cattle rancher J. B. Hammock is determined to stay a bachelor. But sweet Tellie Maddox troubles him, always trying to take care of him: It’s to make him take drastic measures. When Tellie loses part of her memory not even a heartbreaker could be so heartless as to push her away…but what’s a cowboy to do when a friendship turns to something more than either ever imagined? And then Tellie’s memory returns…