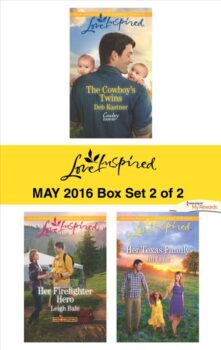 Jax McKenna is exactly the man Faith Dugan needs to help her repair her horse sanctuary. But she never expects to fall for the hunky cowboy---or that he'll needherp raising the twins he finds on his doorstep!

Widow Megan Rocklin just wants to run her diner and keep her children---and her heart---safe from getting close to another man with a dangerous job. Catering meals for the wildfire hotshot crew was never part of her plan---nor was falling for their handsome boss.

Widower Graham Redmond is a single father focused on raising his daughter. But when free spirit Lucy Grayson starts working in his medical office, can he put aside his well-laid plans and see that she's the missing piece to make his family complete?