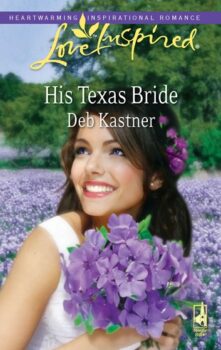 His Texas Bride
by Deb Kastner

It's been years since single father Buck Redmond set foot in his Texas hometown. For good reasons---or so he thinks. He plans to quickly sell his family's ranch and hightail it out with his son. But the Redmond homestead now belongs to his former flame, Ellie McBride. The violet-eyed beauty stirs up all kinds of bittersweet memories---including why Buck left her behind. And she somehow manages to turn his scowling son into a happy, talkative junior cowboy. Soon enough, Buck is reminded of why he loved Ellie. But making her his Texas bride will mean completely opening his heart.