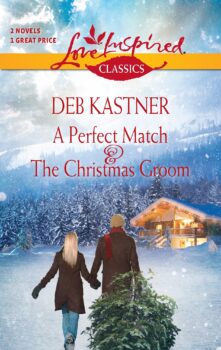 A Perfect Match and The Christmas Groom: An Anthology

A Perfect Match and The Christmas Groom: An Anthology
by Deb Kastner

Julia Evans is certain she's found her Mr. Right. Yet even though she has her eye on a handsome minister, it's carpenter Zeke Taylor who sweeps her off her feet---literally! His courtship takes her by surprise...but perhaps unexpected love could be the greatest gift of all.

The navy was Colin Brockman's escape, but now that he's in chaplain training, he finally has the chance to make choices for himself. Falling in love wasn't on his agenda...until beautiful grad student Holly McCade caught his attention---and his heart.