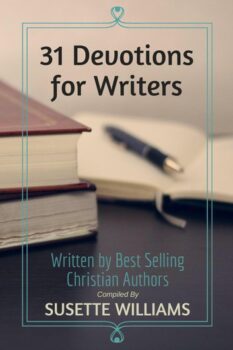 31 Devotions for Writers
by Deb Kastner

Feeling discouraged and need some encouragement?

Read 31 Devotions for Writers, written by published authors who want to help encourage you in your writing through God's written Word.

Writing can often be discouraging. Some writers have spouses or children who don't understand why they spend so much time on the computer. You may face a multitude of rejection from agents or publishers. Or you may not get encouragement in the form of reviews or be nominated for an award. So why do we write? Because we can't give it up! God has called us to write and we feel compelled to pour out our soul in written words. The Bible says, Therefore encourage one another and build each other up, just as in fact you are doing. 1 Thessalonians 5:11 Which is the purpose of this devotional, to encourage you that you are not alone. Other writers have dealt with similar feelings or frustrations, or question themselves, their writing or their motives. I pray that each of you is encouraged as you read the devotions by all of the authors. May God bless you and give you the encouragement and peace you need.