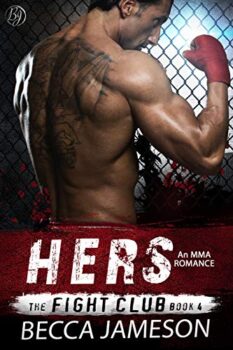 Hers
by Becca Jameson

It’s time to move on, but her past won’t stop haunting her…

Kayla Temple is leery about returning to the lifestyle. Finally free after four horrific years with a man she wishes she could forget, she wants to experience the release again, but can she trust anyone enough to let herself go?

Gage Holland has been watching Kayla for two years. They work together, and she belongs to the same club as him. But she wears a tough shield, and Gage has a full life that leaves him with very little free time.

After engaging in a scene together that goes horribly wrong, Gage is more intrigued than ever. What makes Kayla so skittish? The small taste he’s had of her is not enough. Hiding his own vulnerabilities, he pushes Kayla to open up about her past while avoiding anything that might trigger another bad response.

This book is a re-release of a February 2015 eBook edition by Hartwood Publishing. No additions or changes have been made to the story.