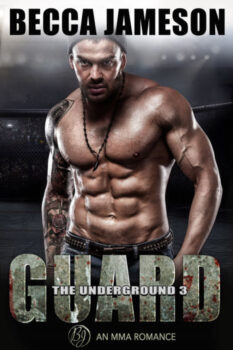 She’s on the run. He’s determined to protect her at all costs. That cost may be her heart.

Mistaken for homeless, Haley was snatched off the street by the Russian Mafia and injected with an unknown substance for two weeks. Confused and scared out of her mind, she manages to get her hands on a gun and shoots randomly at a group of men, hoping to escape.

Mikhail has followed two Russian idiots who work for the Mafia. After a shootout that leaves the two mobsters dead, he’s shocked to find the initial shooter to be a frightened, drugged, redheaded woman who takes his breath away.

Haley’s saga has just begun. The Russian Mafia wants her back. And Mikhail finds himself glued to her side in an effort to protect her. As he falls harder for her every day, he realizes she’s everything he could ever ask for in a woman.

The last thing Haley needs is a man breathing down her back. An enormous man who fights mixed martial arts for an underground Mafia ring and spends the rest of his time bossing her around in a way that makes her heart beat rapidly.

How has she managed to fall for such a bad boy?

Originally published July 2016 in trade paperback and eBook by Hartwood Publishing Group, LLC. No additions or changes have been made to the story.