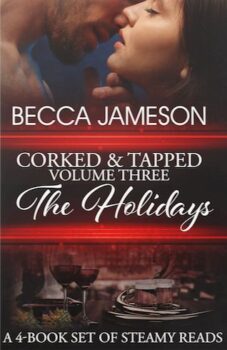 Corked and Tapped, Volume Three: The Holidays
by Becca Jameson

Corked and Tapped is the name of the local neighborhood bar, though the patrons may argue it is far from ordinary. Be prepared for high heat and a whole new level when it comes to "one-night stands."

Blaire:
One bar stool, one gin and tonic, and homework.
That's what Blaire's Friday nights look like.
Her roommate? She gets the apartment, the hot sex, and the life Blaire only dreams of.
Tonight is not going to be like all the others though.
The hot bouncer is finally looking at her, and she's going to put herself out there.

Devin:
He isn't touching his scotch.
Instead, his intense gaze is on her.
Devin has never been this turned on by any man. It's irrational.
He's got plans for her, and when he spells them out, she can't breathe.
She also can't turn him down, even though she may not recognize herself when the night is over.

Paris:
She meets him one night a year on Christmas Eve.
The chemistry between them is explosive.
She doesn't know his name, where he lives, or what he does for a living.
It's been five years. Paris has had enough of the mystery.
Will she ruin everything if she tells him she wants more?

Andrea:
She's been in love with him for years.
She'll never step out into the limelight again though, not even for him.
Sleeping with a famous actor is a bad idea.
He wants to play a game? The stakes are high.
Andrea knows her heart won't survive his proposition...