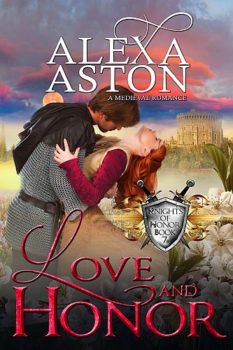 Love and Honor
by Alexa Aston

1385 A.D. — Knighted on the battlefield for extreme bravery, Edward de Montfort accepts an invitation to serve in King Richard’s guard at the royal court. When the king sends him on a covert mission to Canterbury, Edward hopes success will allow him to win his freedom so he can return home to a quieter life.

Lady Rosalyne Parry loses her parents when she is an infant and is raised by her uncle, an artist of some renown. Due to his failing health, Rosalyne takes over Templeton Parry’s commissions, painting in secret while permitting him to receive the credit since she believes no one would accept a woman as an artist.

Rosalyne meets Edward while he is disguised as a peasant working on Canterbury’s wall, and they fall deeply in love. When Edward reveals his true identity to Rosalyne, he convinces her to come to London—and step out from the shadows in order to become recognized as an artist in her own right.

Join Edward and Rosalyne as they navigate the political waters at court and find a deep, abiding love.

Each book in the Knights of Honor series is a standalone story that can be enjoyed out of order.