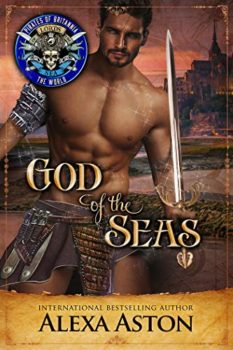 God of the Seas

God of the Seas
by Alexa Aston

Welcome to the Pirates of Britannia Connected World. GOD OF THE SEAS brings Poseidon’s Legion to life during the 13th century and is full of adventure and passion.

1263 A.D. — Melisent Winchester grew up in a convent, orphaned at so young an age that she can’t remember her parents. When a dying nun confesses that Melisent is her daughter, she also reveals that Melisent is a love child, the result of a liaison between the nun and England’s king. Because of political turmoil, Melisent’s life is now in danger. An unnamed knight spirits Melisent away and places her on a ship bound for Cornwall, where she’ll wed a Cornish baron.

As commander of the band of English pirates known as Poseidon’s Legion, Godwin Trenoweth is a man feared by all. When his crew stops to plunder a vessel, little cargo is aboard, but something of great value is found locked in a cabin—King Henry’s bastard daughter. Godwin takes the fiery-haired beauty captive, planning to ransom her to both the king and her intended husband until Godwin decides he wants the beauty for himself.

When Godwin learns he was sold as a boy to the brotherhood of pirates he now commands so that his greedy uncle could claim the earldom Godwin should have inherited, he seeks not only revenge, but a way to leave his pirate life behind in order to offer Melisent a better life.

Will Godwin and Melisent find his uncle and claim a new life—or will Lord Stephen de Blays claim Melisent for himself?

GOD OF THE SEAS serves as a prequel for The King’s Cousins, a new trilogy by Alexa Aston.

Each book in The King’s Cousins Trilogy is a standalone story that can be enjoyed out of order. Look for this exciting medieval romance trilogy in February and March of 2019.