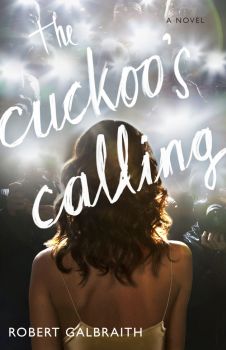 The minute I heard the news report, I knew. The fix was on.

You probably did too.

Some booksellers have told me they laughed out loud when they heard. Then rubbed their hands together with glee and immediately put in an order for more (or in many cases their first) copies of The Cuckoo’s Calling by Robert Galbraith.

Born in 1968, Robert Galbraith is married with two sons. After several years with the Royal Military Police, he was attached to the SIB (Special Investigation Branch), the plain-clothes branch of the RMP. He left the military in 2003 and has been working since then in the civilian security industry. The idea for protagonist Cormoran Strike grew directly out of his own experiences and those of his military friends who have returned to the civilian world. ‘Robert Galbraith’ is a pseudonym.

But now, as the whole world knows, Robert Galbraith is a pseudonym for JK Rowling, author of the Harry Potter series.

Rowling was advised when she first became a published author to use initials instead of her first name, Joanne, because “male authors sold better.” Hmmmm. Maybe. In some cases.

But today I think it safe to say that probably depends on who be the girl author and who be the boy author.

Prior to the announcement of Robert Galbraith’s true identity on July 13, the book had sold 1,500 copies since being released in April. Within a few hours of the announcement sales had increased 150,000%.

By the next day it had jumped to #1 on Kindle.

The London Times reported that Rowling said “I had hoped to keep this secret a little longer because being Robert Galbraith has been such a liberating experience. It has been wonderful to publish without hype or expectation and pure pleasure to get feedback under a different name.”

I don’t have trouble believing that. ‘Cause, let’s face it, it’s not like she needs the money.

And let’s face something else: anything she writes in the future is going to be held up in comparison to the Harry Potter series. And—since lightning seldom strikes in the same place twice—is probably going to be found wanting.

What’s amazing is that she’s had the guts to write anything else under her own name. Harper Lee, author of To Kill a Mockingbird, has yet to do so. And, as has been widely reported, The Casual Vacancy, published not too long ago under Rowling’s own name, was not well received. The sales weren’t bad, but the reviews weren’t great.

My guess is that Rowling genuinely wanted to keep Robert Galbraith’s identity a secret for several years to come. However, if or when her publisher, or their pr department, agreed to do so, they probably had their fingers crossed behind their backs and had a date certain set when they’d “leak” the news.

For, while Rowling doesn’t need the money, publishers always do. And you’ve got to hand it to them: their plan worked!!

If this cuckoo’s calling anything, it’s not “cuckoo,” it’s “ka-ching!”

HOW ABOUT YOU? DO YOU THINK THE PUBLISHER ALWAYS PLANNED TO LEAK THIS NEWS? HAVE YOU READ THE CUCKOO’S CALLING OR CASUAL VACANCY YET? IF SO, WHAT DID YOU THINK ABOUT THEM? A FREE COPY OF MY DEBUT NOVEL, MRS. GOODFELLER, WILL BE RANDOMLY AWARDED TO ONE PERSON WHO LEAVES A COMMENT BELOW BEFORE THE NEXT WRITERSPACE BLOG IS POSTED.